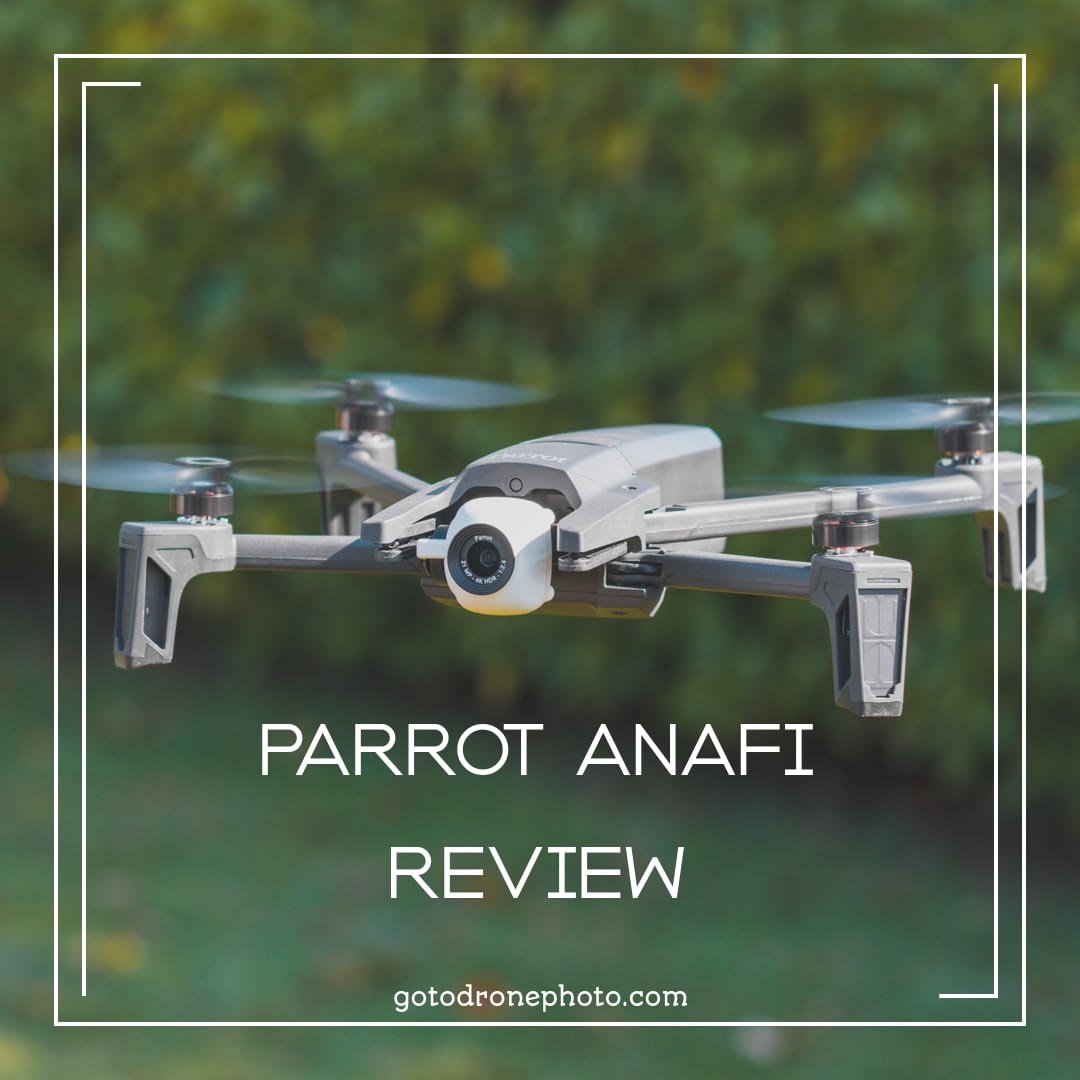 Small drones are nothing new to the Parrot Anafi. Its Bebop series is one of our top recommendations for casual flyers who don’t require a high-powered model with pro features. Its most recent model, the Anafi ($796.79), is smaller than the Bebop 2, but far more capable. It has true gimbal stabilization, 4K video, and innovative features like HDR video capture, an upward-tilting camera, and Hyperlapse (moving time-lapse). We like it a lot, especially for travelers who don’t want to pack another battery charger, and it ranks right up there with the DJI Mavic Air in the world of compact, 4K-capable drones.

Portability at its best – The Parrot Anafi is great for travelers

The case is very attractive. It’s skinny and ovular, matching the folded Anafi’s elongated shape. It perfectly holds the drone and is rigid enough that you can toss it into your backpack or camera bag without fear. Parrot sells the Anafi Extended in addition to the standard kit. It costs $799 and comes with two extra batteries, several extra sets of propellers, a dedicated carrying case, and a two-month subscription to Adobe Creative Cloud’s Photoshop/Lightroom or Premiere Pro plans. The Extended case is a small shoulder bag made of gray cloth with a heather pattern on it. It reminds me of the material used by Peak Design for their backpacks and bags.

The Controller – Slim and comfortable

The remote control can also be stored in the Extended case. If you purchase the standard edition, you will need to make room for it. The remote is gray plastic, about the size of a Nintendo Switch or Xbox controller, and charges via USB-C, just like the aircraft battery. The Skycontroller 3 is what Parrot calls it, and it’s a lot smaller and more affordable than the first-generation Skycontroller that came with the first Bebop drone.

The remote is light and easy to use, with a simple design. It has the expected control sticks—the left to adjust altitude and yaw, and the right to move in an x-axis direction. There is no power switch; instead, the remote is activated by flipping up the integrated smartphone clip. It’s large enough to fit an iPhone 8 Plus, though I had to remove the phone from its case to get it to sit properly. The remote includes a USB-A port for connecting your smartphone as well as a USB-C port for charging.

When the phone clip is extended, the Return-to-Home and Take Off/Landing buttons are revealed in the center. Aside from that, the only controls worth mentioning are the shoulder buttons and the rocker controls. They change the camera’s tilt and zoom.

Underneath the battery is the microSD memory card slot. A 16GB SD card is included, which is enough for approximately 20 minutes of 4K video storage. It’s the style that requires you to carefully place the card against bare metal contacts before securing it with a tiny metal clip. During testing, I encountered a problem in which a card formatted in the drone would not mount as a drive on my iMac. Using the Parrot FreeFlight app, I was able to transfer video to my phone. The problem was a one-time occurrence; after installing a firmware update and reformatting the card, everything is back to normal. Before you begin using the Anafi, make sure the firmware is up to date.

The battery life is excellent. Parrot claims 25 minutes of flight time per charge. Those figures are typically exaggerated because they are based on hovering in place rather than the more common maneuvers you’ll perform with a drone. However, my test flights produced flight times that were very close to Parrot’s claims.

A USB-C port is used to charge the battery. It takes about 2.5 hours to charge using a standard AC adapter, but you can cut that time in half if you use a high-speed model. The Anafi comes with a cable, but you’ll need to bring your own AC adapter—if you have a modern flagship smartphone, it’s likely to come with a high-speed charging adapter.

At its core, the Anafi is a camera—albeit one with propellers instead of a tripod socket. A mechanical gimbal is used to stabilize the front-mounted camera. As a result, even when turning or changing altitude, the aerial footage is silky smooth. It can be tilted all the way down or all the way up. This is unusual for drones and allows you to capture angles that others cannot.

To fully utilize the Anafi’s camera features, you must first download a smartphone app. Parrot FreeFlight 6 is available for free on Android and iOS. The app displays a view through the Anafi’s lens, allows you to change the frame rate and resolution settings, and displays a map of where you’re flying, which is useful if you’re trying to capture video or a photo of a specific landmark.

The video feed is smooth and of excellent quality. From my vantage point on the ground, I had no trouble seeing what the drone’s camera was seeing. When the drone was within visual range, the Anafi delivered a strong signal to the remote, even in a suburban area densely packed with home Wi-Fi networks.

In terms of video quality, you can record in 4K UHD, 2.7K, or 1080p. I chose 4K at 24fps, but you can increase the frame rate to 30fps or up to 60fps at 1080p if you prefer. The Anafi shoots stills in JPG or Raw format at 21MP resolution. Despite having more pixels than a phone or other drones in this price range, the Anafi’s camera sensor is the standard 1/2.3-inch size. Image quality is unquestionably smartphone-level, but this is no longer a derogatory term.

The Anafi distinguishes itself from competitors by supporting HDR capture for both video and stills. It comes in handy when you want to shoot with a lower contrast. Shadow detail is improved, and highlights aren’t as bright. You don’t want to leave it on all the time, but it’s a useful tool for videographers who want ready-to-share video without extensive color grading.

The Parrot Anafi is a Great Combo for New Drone Photographers

Of course, if you’re a pro and want to spend the time grading your own footage, that’s an option. You’ll need to disable the HDR function and go into video settings, but the Anafi also records video with a flat, low-contrast look in its P-Log profile setting, which is ideal for grading. If you don’t want to mess with color correction or don’t have the necessary video editing software, the Natural profile can be tweaked to adjust sharpening, contrast, and color saturation.

In addition to standard video, the Anafi can capture Hyperlapse—moving time lapse—at speeds of 15, 30, 60, 120, and 240x. Of course, a long flight is required to get a dramatic Hyperlapse at the highest settings. You can also shoot half-speed slow-motion at 1080p with the Anafi app, or roll standard speed at 60fps and slow down as needed when editing. The drone does not record sound in any mode, including video. I added some royalty-free music to our sample reel, but the only edits are simple cuts between scenes.

The Anafi has zoom but no optical variety. Its lens supports digital zoom, making it the first drone in the world to do so. It has 3x magnification and covers a 26-78mm angle of view for video and a 23-69mm angle of view for stills. Parrot advertises it as having lossless quality, but that is only true for 1080p recording, where it has 2.8x power before losing quality. As you zoom in at 4K, the video begins to degrade, but it still looks good up to about a 2x setting. At 3x, you can see the cropping—detail decreases and grain increases.

The FreeFlight app for 1080p shooters allows you to limit the zoom to the lossless range. However, there is no way to set a zoom limit in 4K. You can manually limit your zooms to 2x, but I’d prefer that the zoom limit be something you can set in the app, just so I have one less thing to distract me from safe flying.

With the Anafi, you can achieve the dolly zoom effect by zooming in while pulling away from your subject, or vice versa. In Vertigo, Alfred Hitchcock made the shot famous. The drone has an automated dolly zoom effect, as well as some other features, such as perfectly circular orbits, but it’s also fairly simple to achieve manually.

When shopping, you might also consider the DJI Mavic 2 Zoom, which has a similar image and video quality but an optical zoom lens rather than a digital one, allowing you to zoom in on 4K footage without losing anything. However, the cost is an issue. The Mavic 2 Zoom, at $1,249, isn’t quite twice the price of the Anafi, but it’s close.

The image quality is on par with what you’d expect from a flagship smartphone. To get better images from a compact drone, you’ll need to upgrade to one with a larger sensor, which is a more expensive option. The DJI Mavic 2 Pro has a four-times-larger sensor, but it has roughly the same number of pixels as the Anafi. It will produce crisper photos and can also produce good results at twilight, but it is significantly more expensive—$1,500.

To get the most out of your photos, shoot in Raw DNG format. Raw images, like P-Log video, require some work before they’re ready to share. JPG capture is an option if you prefer easy sharing. The Parrot Anafi can capture HDR images but lacks other advanced imaging modes. However, panoramic stitching will be available later this month as part of a free software update.

The Drone You Can Take Anywhere

All of the Anafi’s travel considerations are correct. It’s compact, comes with a useful and protective carrying case, and doesn’t require its own proprietary charger. Just grab the drone and remote with your USB charger, and you’re off to capture great aerial footage.

The Anafi is certainly lacking in some areas. One example is an obstacle avoidance system. They aren’t perfect, but they can help to avoid accidents. If that’s an issue, consider spending an extra $100 on the Mavic Air, the Anafi’s closest competitor in terms of price and design.

Some things the Mavic does better than the Anafi, but the opposite is also true. The Anafi is an excellent performer in its own right, with features that the Mavic lacks, such as digital zoom, HDR video, and Hyperlapse. The Anafi and Air are both examples of what a small, 4K drone can do. It’s up to you whether you prefer the Anafi’s digital zoom, extended gimbal tilt, and USB charging, or the Mavic Air’s automated obstacle avoidance and other unique features.